In the late autumn of 2010, as Dan Savage’s It Gets Better Project climbed quickly to national prominence, and upon my mother telling me how one of the videos had moved her, I complained that I thought the project was not completely honest.

“It gets better? That’s a lie, really,” I retorted argumentatively, “because, if  ‘it’ is one’s experience of the abusive dominant culture, ‘it’ doesn’t get better.  That experience is a constant throughout one’s life; only one’s response to it is susceptible to one’s willful change.  From elementary school through high school and even college, and throughout one’s working life, one is forever subjected to a culture of bullying. Most bullies never outgrow their abusive ways so much as improve their capacity for subtlety, and expand the range of their influence over their victims’ lives — as foremen, managers and chief executives, military, political and spiritual leaders, husbands and fathers.”

(How lucky I am my patient mother endures these verbal tirades without perceiving me a bully. I often find myself at odds with the conventions and trends of gay culture, e.g. the marriage equality movement, in ways that engender these awkward conversations with would-be allies eager to support whatever convention or trend the gay community might be pursuing, but that thorny problem must await another post.)

Derrick Jensen, whose extraordinary writing I’ve cited before, argues that the abusiveness of our culture is intrinsic to civilization, that the creation and sustenance of cities, the defining project of civilization, requires systematic violence; without violence, why would indigenous people ever permit the exploitation and denigration of their watersheds, food sources, and land bases that the support of concentrated populations in cities requires?  The first five premises of Jensen’s Endgame summarize this argument succinctly, so I quote them here in their entirety:

Premise One: Civilization is not and can never be sustainable. This is especially true for industrial civilization.

Premise Three: Our way of living – industrial civilization – is based on, requires, and would collapse very quickly without persistent and widespread violence.

Premise Four:  Civilization is based on a clearly defined and widely accepted, yet unarticulated hierarchy. Violence done by those higher on the hierarchy to those lower is nearly always invisible, that is, unnoticed. When it is noticed, it is fully rationalized. Violence done by those lower on the hierarchy to those higher is unthinkable, and when it does occur is regarded with shock, horror, and the fetishization of the victims.

The implications of the fourth of these premises have weighed heavily on me in the aftermath of the Boston Marathon bombing, because the attack was, arguably, an example of “violence done by those lower on the hierarchy to those higher,” and, with all due respect to the dead, the injured, and their families, the reactions of the dominant culture has closely tracked the predictions of the fourth premise. Again and again in the days since the bombing, politicians, civic leaders, and commentators have used these very words to describe the attack: shocking, horrible, unthinkable. Yet, how many of them have used those words to describe any of the far more excessive and far more murderous elements of United States foreign policy? To me, the 2003 bombing of Bagdhad and the consequent murder and maiming of thousands of innocent Iraquis was shocking. To me, the use of radioactive munitions in the Battle of Fallujah with its legacy of illness and birth defects was, and remains horrible. To me, drones swooping from the sky to kill our so-called enemies – let alone the innocent bystanders and the wrongly targeted – are unthinkable. But the dominant culture seems to find these things not so much unthinkable as easier not to think about.

Authorities tell us the surviving alleged perpetrator of the Boston Marathon bombing admitted that religious beliefs motivated him and his brother, and that they undertook their attack as a protest against America’s ongoing wars, but such a direct connection to United States foreign policy is not required to make the point: attacks such as the one on Boylston Street are hardly unthinkable; as long as the United States remains determined in its worldwide bellicosity, such attacks seem quite thinkable to me, even inevitable. How is it so many Americans have come to believe that United States military and intelligence forces can range the globe wreaking mayhem, killing people, terrorizing cities, and poisoning communities with depleted uranium without the violence coming home to roost?

Moreover, such a direct connection between the motives behind the Boston Marathon bombing and United States foreign policy may well distract from a larger point: the stated reasons of the alleged bombers’ actions are relevant only in the superficial way a married couple’s stated reasons for arguing relate to their argument; rarely does anyone do anything for only one reason, and more rarely still does anyone’s deepest motives find overt expression. Thus, the couple continues to fight, never resolving, possibly never aware of, the less obvious causes of the discord. Thus, the bombers continue to strike, and state security apparatuses cannot expect to stop them while ignoring their less obvious motivations.

Given a singular, if wildly diverse, earthly nature – a system that has evolved to self-regulate for life – might one not also conjecture that earthly desires and earthly discontent operate within that system as feedback loops, the means by which different components in the system share information vital to its self-regulation? With every report of violence exploding up the hierarchy, I can’t help but speculate that over-population, the effect of denigrated foodsheds, cultures of sexual oppression, and other similar forces are as much in play as the stated reasons of an alleged bomber, or an alleged mass shooter for that matter. 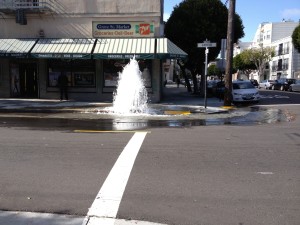 When a hydrant fails, the pressure in the main creates a waterspout.

Only a week after the Boston Marathon bombing, as my canine companion, Red Sonja, and I walked up Octavia Street towards Patricia’s Green, we encountered the most spectacular disemboguement of water from the city’s fire main. The frothy white jet d’eau gushed several meters above the opening in the sidewalk’s pavement where the painted hydrant once stood, then cascaded back upon itself in a sparkling cataract that fully whelmed the storm drain. Passers-by couldn’t resist stopping and watching, taking photos and video; the raw beauty of such a quantity of water spewing with such force seemed to mesmerize all. In its eruption, the spill animated, vividly and brilliantly, what practitioners of permaculture call the general core model – or at least its upper half – entailing all the patterns of nature in one dynamic, mnemonic representation. Maybe some primal appreciation of that significance explained the compulsion to stare into the inflorescent spume. 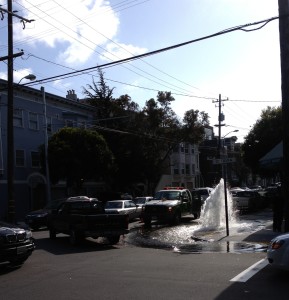 By the time Red Sonja and I arrived, workers had already removed the failed plug.

I had no clue what had happened to the fireplug previously capping the main that now surged its geyser into the April sunlight. Perhaps a motorist sheared it away, or some metallurgic weakness led to the failure of one of its closures; the firefighters seemed fully aware of the plug’s demise as they approached the scene for what appeared to be at least the second time, so I surmised they had already cleared away the old hydrant. It was nowhere to be seen. 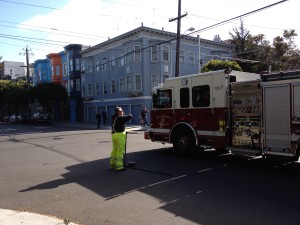 City workers need to know why the plug failed.

The superficially recognizable and stated motivations of a certain bomber or a particular mass shooter are like the causes of a single fire hydrant’s failure. I understand why the fire and public works departments must properly assign importance to discerning the superficial causes of a single failure as part of preventing future failures, but when the city worker dismounted his truck cab with an over-sized wrench and tee-bar to shut the valve controlling flow to the main, he was enacting a tacit admission: as long as pumps and gravity maintain high water pressure in the main, such failures are inevitable.

So it is with our overcrowded, overheated, unsustainably farmed, and war-torn planet. However different the explicit motives recognized in Ted Kaczynski, Timothy McVeigh, Eric Harris and Dylan Klebold, Ross Truett Ashley, Adam Lanza, and now, allegedly, the Tsarnaev brothers, they are all connected, like a city’s fireplugs, by the same underlying pressures. Perhaps the culture of bullying is just such an underlying pressure. I suspect that if the United States would secure its communities against such attacks, it must first see itself as it truly is, bully through and through.

One needn’t accept Jensen’s premises to recognize this fundamental fact: on the world’s playground, the United States of America is the über-bully. See how it puffs itself up, how flamboyantly it struts and threatens, how quickly it pushes and shoves and snarls, how decisively it strikes, and how it bawls the moment any raise a fist in kind. Once challenged by even the slightest resistance, America whines and complains louder than any of its victims. The land of the brave, indeed! Ours is the land of the bully-cum-crybaby. 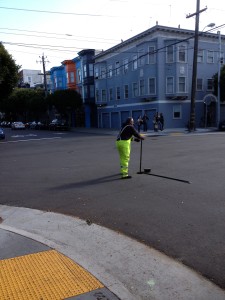 A worker must close the main to stop the flow.

The waterspout at Octavia and Grove Streets must have released hundreds of gallons by the time the water department arrived on the scene to wrench closed the fire main that serves that particular city block.  Sonja and I stood and watched as the fluxion slowed and fell and drained away. 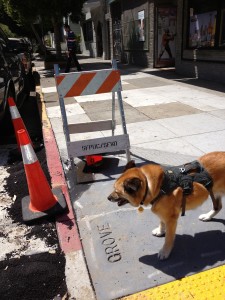 The following day, the breach remained only temporarily repaired, with an inverted traffic cone protruding from its gape, and even today, although the inverted traffic cone has been replaced with a metal cover, the hydrant itself has yet to be replaced.  Similarly, our neighborhoods, schools, and homes will remain unsecured and ourselves unsafe if we continue to ignore the deeper pressures underlying eruptions such as the Boston Marathon bombing. To resist unflinching self-criticism in the aftermath of such attacks is certainly to invite their violent reprise. Rather, we must all now take a collective look in the national mirror, and recognize the bully in us. 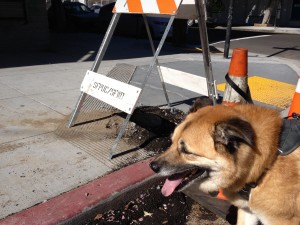 A proper cap has replaced the inverted traffic cone, but still no hydrant.