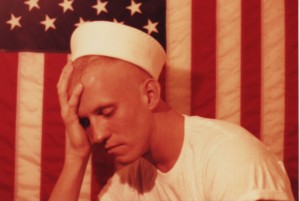 When the United States Navy discharged me for homosexuality in 1987, I returned to a civilian world in which I identified as gay, but I was almost immediately uneasy with that label, and as the decade drew to its close, I found myself ever more likely to call myself queer. AIDS had a lot to do with it, no doubt. Gay, conveying as it did the merry lightheartedness explicit in its dictionary definition, hardly seemed appropriate in a community so devastated by illness and death. By 1991, the word itself seemed to catch in my throat. I was angry, I was grieving, and I was serious, but I was most especially not merry. My friends and lovers were most especially not lighthearted. The whole world could see: we were not gay.

At the time, I believed my entire generation was rejecting the identity of gay. We would all be queer, now, nevermore to be gay again, no going back. In the words of a Queer Nation slogan, words I used myself: the queer revolution had begun. Our shared tribulation in the era of AIDS, I thought, would propel us beyond the old labels of identity politics, beyond the restrictive branding of visibility politics, beyond the special interest agendas of a myopic political movement, and beyond even the constraints of a binary understanding of sexual desire and gender.

I don’t intend to revisit the last thirty years of history, gay or queer, in the pages of this blog. Neither do I mean to debate whether I was mistaken, in 1991, when I declared along with others the beginning of a queer revolution. Nor do I propose to relate herein my own queer experiences of the last half-century. (I’m writing a book to attempt those hurdles.) Rather, with this blog, I intend to look humbly and skeptically forward, perhaps to seed the future with little bits of queerness in hopes they will someday sprout into nonconforming splendor, and to add my own queer voice to all those who continue to resist assimilating trends and hetero-normative expectations in the ongoing struggle that may yet, indeed, reveal itself as a queer revolution.

To begin, then, I would share with you my greatest fears and hopes for our queer future, and I will try to explain them in the context of the current movement for marriage equality. I’m not a lawyer, or an academic philosopher, or even a queer studies scholar. I’m just a self-educated thinker groping for answers, unable to account for his own contradictions. Please accept what follows in that spirit.

My greatest fear is that the gay movement will be successful in achieving legal and social inclusion through a mere expansion of the shared conventions around sexuality and desire, rather than by challenging the very paradigm of acknowledging such conventions at all. I won’t argue against the far-reaching successes of the gay movement in my lifetime; I have contributed to those successes, and I applaud those successes as possibly necessary steps to a queerer future. However, if the essence of queer power is derived from the unique perspectives and diverse potentialities arising from the experiences and circumstances of non-comformity, how do we retain that power once same-sex-gender desire has become just another kind of normal? In other words, I fear that achieving the acceptance to be gay will rob us of the power to be queer – a staggering loss, not only to queerkind, but also to humankind. My other fear, closely related to the first, is the likelihood that any expansion of shared conventions will never be adequate to encompass sexuality and desire in all its diverse expressions, so that all frameworks of legal and social inclusion mapped to sexuality and desire will ultimately prove to be exclusive. To define a convention is to create the unconventional.

My greatest hope is that the expanding socio-cultural conventions around non-conforming sexuality will create an environment of both freedom and security for the next generation of faggots and dykes and freaks of all stripes: the freedom, possibly, to be queer in some altogether yet unimagined way that, needing no name, abandons the static labels ever encroaching on desire, together with the security, hopefully, to be fully included in family love and civil life, regardless of labels or lack thereof, an inclusion protected under law and implemented through a healthy secular culture. 2013 may well be the year the Supreme Court of the United States (SCOTUS) rules the Defense of Marriage Act (DOMA) to be unconstitutional. DOMA’s repeal, combined with the 2012 repeal of Don’t Ask, Don’t Tell (DADT) promises a future when queer sailors, soldiers, and marines will enjoy the same spousal benefits enjoyed by service members in traditional, that is to say, different-sex-gender marriages – something I myself once demanded in a manifesto distributed at the 1993 March on Washington for Lesbian, Gay, and Bi Equal Rights, when such a possibility seemed an unlikely and distant dream. Only once this long overdue expansion of benefits to queer service members is realized can we truly say we have lifted the ban, and such a clear victory for queer economic justice will undoubtedly signal a new, more accepting era in American life.